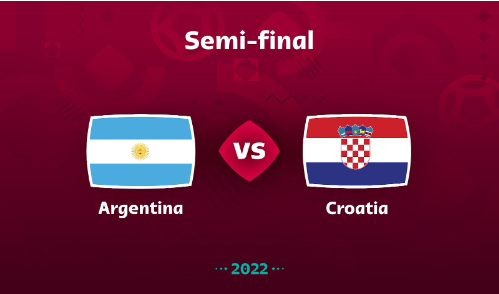 Croatia was able to bring Neymar and his team to tears on December 9, 2022, in the quarterfinals of the FIFA World Cup 2022. The next challenge is not going to be easy, with Argentina waiting at Lusail Stadium for the match on December 14, 2022.

The runner-up of the 2018 edition of the international tournament wants to at least replicate the moment in this edition; however, Messi and his team have set a target to get their hands on the trophy no matter what.

Croatia looks to put up a brave fight, as it did against Brazil. A penalty round served as the deciding factor for moving on to the next knockout round when the match ended with an equal score after extra time. Neymar pulled off a miracle in the 106th minute, but Bruno caught up to him in the 117th.

Rodrygo missed Brazil’s opening penalty, which gave Croatia the advantage. The opposition then made four successful shots in its subsequent efforts. Prior to Marquinhos missing his chance against Livakovic, Casemiro and Pedro kept the possibility alive.

Scaloni’s men beat the Netherlands 4-3 in the penalty shootout. They are now up against Modric’s midfield trio of Brozovic and Kovacic.

Josip Juravonic, Croatia’s defender, said that the team needs to look at itself to play its best game. He added that the secret to their success in the tournament so far is their unity and togetherness.

Bruno Petkovic, Croatia’s striker, said that there is no specific plan against Argentina; however, they will focus on stopping the entire team and not just one player alone.

Argentina last came close to winning the FIFA World Cup final in 2014. Germany secured a 1-0 victory at the Maracana Stadium in Brazil. Argentina now hopes to return to the finals and win the trophy and championship title.

Only one more game stands between Messi and his goal of winning the FIFA World Cup. Messi has already written history by being the first player to score a goal in the world cup’s knockout round. Momentum is in their favor, and Argentina will not let it go. One of the most cherished moments in the history of football is when Messi assists Molina on a goal. Messi would still find a way to contribute to a successful shot, even if Croatia was to mark or defend him.

A team that loses in the semi-final round will face each other on December 17, 2022, at Khalifa International Stadium at 8:30 a.m. IST for the third spot.